We have a lot of fun each year with our annual New Year's Eve party, so this year we decided to start a new tradition.  Usually, we are slow around the 4th of July, so we have not tried to do anything with the inn. Modus Operandi has usually meant closing and going out to the lake.  But we had a thought that maybe people would like a break from the crowds for the holiday, so we decided to put together our type of party!

Our invitation was well received, and we were sold out quickly.  What we came up with was our take on traditional Americana celebration of our nation's independence.  Guests were excited to be a part of the fun and the staff was too. 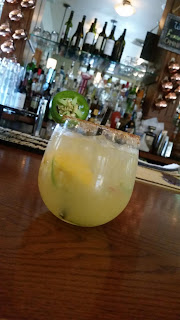 The day's events began at 3pm with the opening of the bar at the pool.  My second oldest son has almost as vast a knowledge of craft cocktails as I do food... so he says.  He was free and volunteered to serve as our master mixer for the day.  He was pretty excited because he loved his time "behind bars"... he was not in prison, but did bartend for a long time and also owned a music venue that was craft cocktail focused.

The adult offerings included beer, ciders, wine, and tipsy watermelon squares to go along with his Margarita Bar.  Each of these was made with a secret blend of spiced salt rim and hand squeezed juice upon order with options including jalapeno, watermelon, sangria as well as tradicional margarita.  Admittedly, they were as good as they were potent.  So I was told.  By me.

With libations firmly in hand, we started the day off with an intermittent schedule of games, events, refreshments and pool time for everyone to participate in as they chose.  The games included pretty decent prizes, so everyone was even happier to join in the fun.

The first of these was a water balloon toss that one couple was surprisingly good at and won with ease... they clearly had the youngest children.  The victors took home some beautiful German style art pieces depicting some local attractions along with a gift bag from shops in our town. 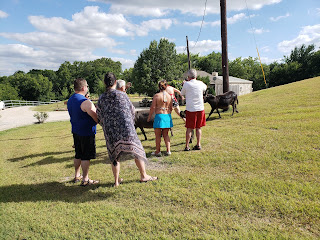 The next game was a more challenging one.  It was a foot race up the hill in front of the manor house.  But... not just a footrace, it was a 6 legged race.  To win, you had to bring one of our tiny donkeys up the hill and back with you.  As you can imagine, this was more of a challenge, as donkeys can be kind of an ass.  This one was won by a crafty gentleman who snuck a handful of feed out of the donkey's bucket! He won some custom made aluminum reusable insulated water bottles for himself and his date.

Next came Dinner.  This included smoked home ground sausage, smoked chicken, reverse seared, smoked steaks, and sides were smoked cream corn in husk boats, a fresh dill potato salad, bbq ratatouille, rosemary and pork ranch style beans. As we had all worked up an appetite we all devoured the meal before festivities carried on. 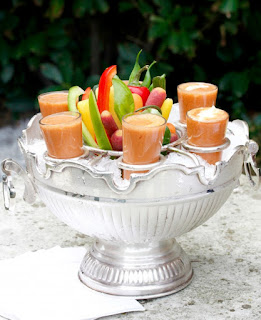 The last game of the day was a challenge game.  There was a board of red white and blue balloons in the shape of a flag that each contained dares.  Players picked and popped a balloon and read the challenge aloud.  This was a last man standing game, as players could choose to attempt the challenge, or drop out, and still had to complete it to advance to the next round.  I will say, that I wasn't expecting the tequila to factor in so much as it did as a performance enhancing drug.

Players inhibitions were low and courage was high... this lead to some very memorable challenge acceptances.  We saw mustard, ketchup, cholula, and a raw egg all taken as shots, an arm shaved, feet smelt, and peanut butter both used as a face rejuvenator and eaten off another competitor among many other things!  In the end, the winner took home a 2 night stay at the manor for future use, and it was well earned. 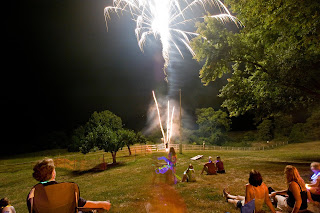 This ate up the time for the sun to finally make it's way down the sky, so we made our way to the rear of the property for our own fireworks display.  My husband, son and our groundskeeper donned lighters and punks and set the night ablaze with morters and the like so that we could have a taste of the rockets red glare, bombs bursting in air, and all the proof in the night that our flag was still there.

As a nightcap, the bar made it's last drinks as we all made s'mores with homemade marshmallows and chocolate bars atop traditional graham crackers. It made for a perfect parking break to our First Annual Elm Creek Manor 4th of July Celebration.  Hope to see you all next year! ...or sooner.