One of my favorite times of year, here in Muenster is Germanfest.  With it's rich German heritage, all of Texas is familiar with its influence on our culture.  People usually think of the Latin influence in our heritage, but it is as richly peppered with bavarian as well.  Sausage, meat market style BBQ, most of the early settlements, and even Tejano music all come from or have roots in the German influx of early Texas settlement.  Muenster is one of these gifts brought by Germans to Texas.  Officially founded in 1889, in the early statehood, this german-Catholic town loves to showcase its history at Germanfest.  People here are friendly and have a very familial attitude that is seen in every aspect of the place.  This is evident from the moment you get into town and pass the big "Wilkomen!" sign on your way to the fair grounds.  Most people are familiar with Oktoberfest or Wurstfest, and Germanfest is very similar to that, but held in April.  Muenster actually does celebrate an Oktoberfest, but in this case, it is the lil brother to the big party in the Spring.

As you would expect, the Beirgarten (a giant refrigerated semi trailer with taps down the side) and German food are the main event at this spectacle, but don't think the rest of the party gets completely outshined.  Music, crafts, and games all share the spotlight here as well, though the people watching here is pretty spectacular.  You never know who or what you are going to see here.  There are 2 stages with one featuring traditional german style polkas and dancing and the other with more modern style bands and a big haybale made set of bleachers to watch from.  My son actually convinced one of the bands to let him get on stage years ago to propose to his girlfriend! 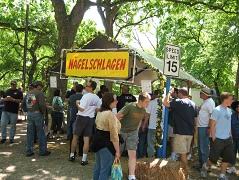 Both big individual events and ones that go on throughout the weekend are exciting to watch or compete in.  Featured games like Nagelschlagen and arm wrestling are staples here.  Nagelschlagen is a traditional game where one has a pin nosed hammer and has to drive a spike into a tree stump like block in the fewest strikes necessary into the wood.  The contest starts Friday and goes on til Sunday with prizes and a trophy at stake, but along the way, it's not uncommon to hear the audience placing side bets each round.  There is also a BBQ Contest, bike race, and 2 fun runs over the fest.

Each day of the three day festival has its own draw. Friday is all about the wind up, and the opening ceremonies and the first bands take the stages.  There is a palpable excitement as the carnival starts up and the kids just getting out of school come out in droves to ride the rides and gorge on festival delights like cotton candy, funnel cake, and local treats like fresh made real kettle corn!  The BBQ contest starts Friday when the smokers fire up and the onsite prep starts up.  This one is my son's favorite things about the weekend.  He says that the best part for him is hanging out overnight with his buddies in the camping area where the contestants give out samples as the smoking and cooking goes on. 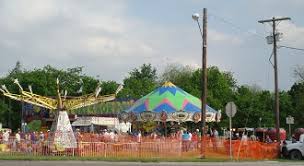 Saturday starts with the bike races at 10am with 35k, 65k, and 100k rides.  Riders line up and take off for the long race early in the festival day.  Sometimes we go out to a friend's house outside of town.  They live on the racecourse about 12 miles in, and have lunch on the lawn and let the kids cheer on the racers as they pass, which they love.  It's a lot like a poor man's Tour de France... a really poor man.  The BBQ contest finishes up cooking on Saturday and judging begins.  This is when you want to be in the right place at the right time, that being around the BBQ tents when judging is finishing up, because that is when you get to partake in some killer Q. 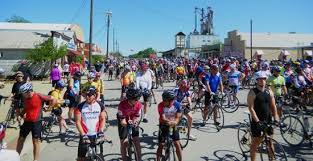 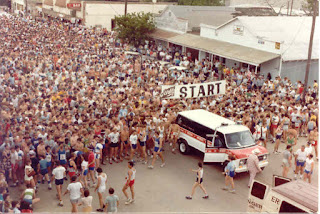 Sunday is the weekend wrap up and the main event, the 42nd annual fun run.  There are 5k & 15k runs that start at noon.  I have come to the conclusion that even though both the bike race and run come with free beer/soda tickets, competing in the pair is the only way to not put on weight over the weekend.  If not, just resign yourself to the idea that you need to dust off that leftover gym membership from January's New Year's resolution.  By this point you will have familiarized yourself with all the food vendors and the massive tent full of brats and kraut, so take this last chance to try the things you were saving for last or get a little more of something you loved along the way.  I always go back for brats until I physically can't anymore; I've found that personally the stick approach works best for me!  No matter what your weakness is, be it German sausage, schnitzels, German potato salad or anything else you only find at these kind of celebrations, they have it here. 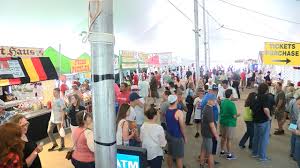 Every year, as the last band wraps up Sunday evening, as full as I am, and tired from the long weekend of fun, I always feel sad that I have to wait another year for all of this to come around again... or at least until October.
at March 07, 2018