Dr. Golflove or: How I Learned to Stop Worrying and Love the Ball

So I broke out of my already flimsy box a couple of weeks ago, I tried golfing!  I had been excited because one of my oldest friends was coming to visit.  Her younger son graduates high school this year, and was on a trip to visit colleges with his father, so she found herself free for a few days for the first time in a while.  When she let me know about her availability, I immediately invited her up for a girls' retreat.  I suggested that my husband take a camping trip for a couple of days and he leapt on it.  Given he saw the other option being a likely longer "honey do" list, it didn't take much convincing.

I didn't make a lot of plans as I figured a laissez faire approach would be more relaxing, but assumed a trip to a vineyard and some cocktails and spa time was in order.  I booked a massage for the two of us here at Elm Creek, and asked her what she wanted to do after.  She told me that when she was in college, at Southern Methodist in Dallas, she and her friends used to come to Muenster often.  That blew my mind, picturing some SMU sorority girls rolling in to tiny Muenster for a good time, like something from a movie.

It turned out one of her sisters was from Muenster and they went to visit her family one weekend and checked out the newly opened (in the early nineties) golf course.  In this town, anything new is big news, so I can imagine the buzz around town for that lil gem.  Turns out they had a blast and kept coming back with their friends throughout her time there.  So she was very insistent on making a tee time for the two of us.  I was hesitant as i am not a golfer, at all, but she was dead set and insisted I could "take it at my own pace".  I finally agreed, she appealed to my chardonnay side by telling me we'd essentially be riding around a giant park in an electric cart with a glass of wine on a beautifulday.  How could I say no?! 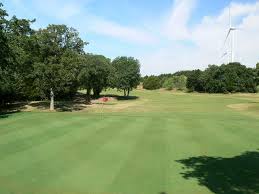 I let her handle the heavy lifting on getting us set up at the course.  We got lucky and they had a tee time available in perfect time for us.  We got a little cooler together (it's BYOB) with some wine and mixed a couple of summery cocktails and hit the road.  When I loaded up the cooler, I saw she had brought her clubs that we would share, as I had none, and she had clearly planned ahead!  They don't offer rentals at the course, so this was a smart move on her part.

When we got there, we got some snacks, and some locally made sausages at the shop.  The cart boy brought us up a cart and we went to drive a couple of balls so she could teach me how it's done.  Well... show me how it's done, not too much was retained on my part at first. after a little while, our tee time came up, so we made our way to the first hole and she tee'd off a really nice shot.  After a couple of tries we decided I would just go from her tee shot as there were some people that looked like they were getting ready to head to our tee box. 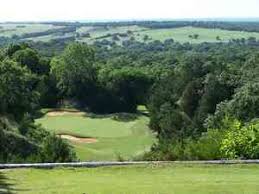 The course is set on a beautiful piece of north Texas hill country with rolling hills, old oak trees and lots of wildflowers blooming.  I heard some of the golfers talking and they pointed out that the way the course was set on rolling hills was not as common and made for a fun challenging course.  I loved the views and honestly spent more time "sitting this one out" and "caddying" for her.  This meant I was the bartender and drink holder most of the time.  I was fine with that, and her promise of a day of riding around a gorgeous park and sipping cocktails in the sun was as advertised, and well worth it.  I also now know why my sons enjoy it so much, it is incredibly peaceful out there! 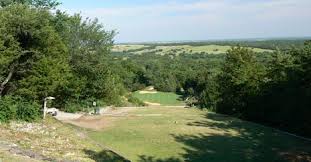 She was a really good golfer as I learned from the impressed look on a few guys we spoke to after the round when they asked what she shot.  Before that day, most of my golf knowledge came from Caddyshack and Happy Gilmore, but after the 18 hole immersion course, I learned a lot and have been since thinking I may take up a new hobby!

For information on setting up a round at Turtle Hill Golf Course, here is the link to their website: http://www.playtheturtle.com/index.htm
at March 14, 2018